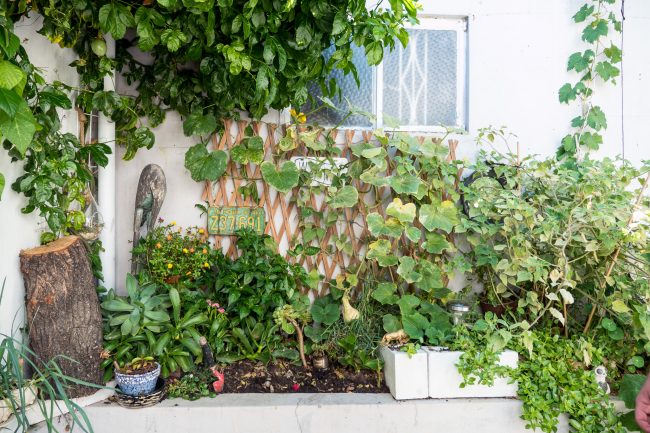 Andrew Macfarlane has always been an ideas man, working in advertising and now PR. It’s what he does to put butter on his toast. The inspiration for his hanging garden was a combination of titbits. He had a colleague who used to have his own homemade hydroponic system at the office. Andrew asked [him some questions about] how it worked, then moved on with his life.

A few months later he was with a friend who owned a restaurant in the Cape Quarter Lifestyle Village, Bedouin Café & Deli. She told him that sometimes she struggles to buy mint for her Labneh, which is a delicious type of cheese. In the dark recesses of his mind, a little light went on and without even thinking he blurted out:

“I’ll grow you tons of mint! I sort of know how hydroponics works.”

This was the first step in his self-taught journey on becoming an urban farmer.

Tip 1: Get the idea and just do

Often when an idea pops up we’re hesitant to act on it. In my case I had a rough idea of what it sort of looked like. I visited the local hardware store and came home with six metres of piping, a water pump, nine wall brackets, four spray paint cans – three weekends later it was done.

From killing a lot of plants to becoming a frequent, confused visitor in hardware stores, I’ve had to eat a lot of humble pie. Like any new ideas there are bound to be some kinks so you need to keep adapting. I’ve learnt more from my mistakes, for every project I’ve undertaken only half have actually worked.

Tip 3: Experiment whenever you can

Diversifying the way you grow your plants will allow you to see which way is best. I had two seedling trays growing seeds, one hydroponically and the other a normal seedling tray. I was amazed at the difference, and it was fun.

My wife, a ceramic artist, is always on hand to give me advice. She also provides 50% of the pots, both ground and hanging, in our backyard. We’re always trying something new in the backyard, where I’m the muscle and she’s the brains.

Often when undertaking a massive project, like the hanging hydroponic system, you need to keep the momentum going. If I’d stopped half way through this project it would have never been completed.

I chose to create the hydroponic system, not because it was hard but because with the limited space in our 4x4m backyard. In my system I can grow 35 plants on 2 metres of wall. Another thing to remember with space is the size of plants. Vegetables and herbs are great, olive trees are a no.

Tip 7: You need a routine

If you’re the type of person who can’t squeeze an extra 10 minute activity into your day, I’d turn the other way right now. Even though I could put on a timer for the systems in my backyard I still need to maintain nutrient levels, watering and pest control. But I love tinkering in the garden so I make time for it.

I had beans in the system that eventually died due to bad nutrients. But before they were thrown into the Bokashi composter I took some of their beans and planted them. Now I have more nearly dead beans.

Recently I’ve started driving to large hardware stores and asking for old pallets. Certain pallets are not recollected from distributors and are actually given away for free, you just have to ask. Building your own planting boxes helps cut down the expenses on an expensive hobby.

There’s no reason why I painted the system gold, I just thought it would look cool. Luckily it came out the way it did. I’m pretty sure no one has ever glammed up their hydroponic system. But I tailored it to best suit our aesthetic Otherwise it would have looked like a drunken plumber’s handy work.

The yard is far from complete, as it is a constant work in progress. If you’re interested in seeing him complete more projects in the backyard, follow him on Instagram.

All photos provided were taken by Roice Nel.