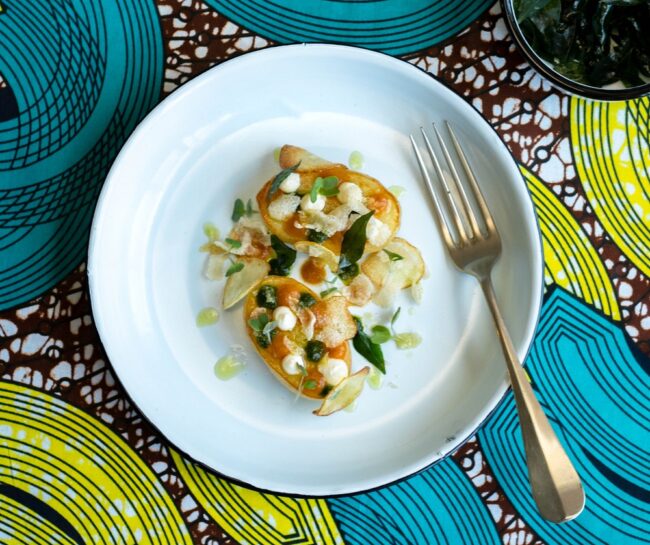 Dishes created by the humble Molefe impressed a team of anonymous food critics, with the panel of judges convened by Chad Fourie, the chief judge of the Luxe Restaurant Awards and the managing director of The Hospitality Counsel.

Emazulwini was one of three fine-dining restaurants at the V&A Waterfront, which scooped awards at the Luxe Restaurant Awards – Pier won New Restaurant of the Year while chef Siba Mtongana of The Table Bay’s eponymous ‘Siba’ won the Culinary Icon Award.

Emazulwini, which opened about 18 months ago, is a modern Zulu-inspired restaurant which seeks to celebrate Nguni cuisine and South African ingredients. “We are just a small 10-seater space, and are still testing whether the idea works,” Molefe said. Just four people work at Emazulwini; one person handles front of house with three in the kitchen.

“We travelled to the awards ceremony in Johannesburg mostly to meet industry players that I have engaged with online, and we just happened to win an award. However, I am now a little anxious because people might come to dine with higher expectations.”

Molefe’s aim is to continue spreading the word about rethinking traditional food and reusing ingredients that people deem less than worthy.

Emazulwini recently launched its summer menu, which is dedicated to Molefe’s parents. “It is a seven-course set menu, starting with mielie bread sticks with sweetcorn dip and parsley mayo, and includes dishes such as vetkoek with home-made chicken polony, white cheddar catalan, and corned beef tongue with tomato purée. The chicken neck mousse tartlet looks so cute that is my personal favourite.”

“My mother, Sindi, and Chef Ryan Cole who I worked under at Salsify at the Roundhouse inspire the way I cook.”

Molefe’s aim is to continue spreading the word about rethinking traditional food and reusing ingredients that people deem less than worthy. “We use a lot of offal on the menu at the moment, which is usually seen as food that privileged people don’t want to eat, but it has a lot of flavour and can be used with many different techniques.

“Awareness of Emazulwini has been constantly growing since we opened, so I am sure this award will continue that and help us to expand further.”

“After a difficult time under COVID-19 for the restaurant industry, it is good to see renewed interest and focus in this category again. We are welcoming visitors back to their favourite destination with a fresh line-up of food offerings, and are extremely privileged to be home to a range and degree of diversity in quality chefs and restaurants acknowledged to be the best in their categories”, said Alex Kabalin, the executive for retail at the Waterfront.